Hitting the Rock in Parenting

Moses is an intriguing character in the Bible. His insecurities and doubts tend to resonate with many who read the story of this man raised up from an Egyptian palace to lead a nation through the  wilderness into a land of promise. Just as those in ministry can learn from his humble leadership and wise delegation of responsibilities while leading a group of diverse people, so parents can glean insight into the parenting journey from the life of Moses.

That's why Numbers 20 is so convicting to me as a mom of three (soon to be four) and why I think all parents can learn from this tragic story. 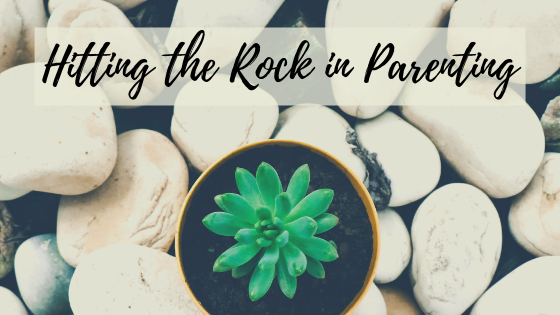 The chapter opens with the sad death and burial of Moses' sister, Miriam. Soon afterwards, we read the account of a quarrel between the people of Israel and Moses and Aaron. They were grumbling again about the very real lack of water in the wilderness. Their attitudes oozed with distrust and discontentment, not only with their human leaders, but with God Himself.

The careful reader of the Old Testament will feel a little bit of deja vu at this point because this was not the first time that the Israelites had been in desperate need of water. For example, in Exodus 15 the people were left with only bitter, undrinkable water soon after leaving Egypt. God instructed Moses to throw a log into the rancid water immediately transforming it into a sweet, refreshing drink for the people.

Exodus 17 records the complaints of the people when they found no water at their new camp. They once again accused Moses and their God of leading them out of the slavery of Egypt simply to die of dehydration in the wilderness. Moses called out to God in desperation and was told to strike the rock at Horeb in order for water to flow out to the people.

At this point in Numbers, Moses is leading an almost entirely new generation of people. Those over twenty who had left the slavery of Egypt had died during their forty years of wandering. It's obvious that the sin of unbelief is still strong in this new generation, and Moses once again turned to God for guidance in dealing with their grumbling attitudes.

God directed Moses to speak to the rock in anticipation of the miracle God would perform in bringing water forth to relieve the people and livestock of their thirst.

Moses' first mistake was instead speaking to the rebellious people instead of the rock as instructed. He then proceeded to strike the rock with his staff out of unchecked anger and for his own vindication. Ironically, in this disobedient act he fell into the same sin of unbelief as the people he was leading.

It's almost shocking to read that God still performed the promised miracle, bringing water out of the rock to provide for His people. He wanted His glory (not Moses') to be known. His work was an act of mercy to Moses and the nation. However, this story would end with judgment as Moses would not be allowed to enter the land he had so patiently waited to see. Such a sad ending to the story.

I see myself in Moses, because I often "hit the rock" in my parenting.

When my children misbehave or act in unbelieving ways, I take matters into my own hands. I'm  more concerned with my image and the results of well-behaved children than acting in patient obedience toward my God. My children receive the brunt of my angry and offended attitude. I am more upset with the fact that they broke my rules than God's. My heart isn't grieved over their sin. Instead, my heart is fed up with how their sin interrupts my day!

This kind of parenting can have consequences just like Moses received. When we parent in independent, unbelieving ways, we might reap children who struggle deeply with that same lack of faith. They may be outright rebellious or battle a moralistic view of godly living.

Even when we find ourselves hitting the rock yet again out of impatience and desperation, we have the confidence that unlike Moses, we will still enter the Promise Land one day. Jesus took the ultimate judgement of our unbelief on Himself allowing us to see God's working in our children's lives, to see His mercy in our own lives, and the ultimate gift of Himself for all eternity.