On Fevers and Advent


I gently separated her damp curls from her sweaty neck. Her cries had forced me out of bed just as I was falling asleep. It was obvious that the fever had tightened its grip on her little body and was planning to hold on throughout the night.

It had appeared suddenly after her nap earlier in the afternoon. She didn't complain, but lay lethargically on her daddy's chest until an early bedtime. Her toddler sparkle had been replaced by an indifference to the world around her.

There is not much a mother can do during these small battles with germs. I wish the maternal guidebook included a magic potion to relieve all the possible illnesses our children may contract during their years under our roof. I wish I could experience their symptoms for them leaving them healthy and carefree.

Instead, their small bodies must fight the germs on their own. They must build an immunity to disease. Their white blood cells must strengthen to fight off future viruses.
As a mother, I can only offer comfort, cool drinks, and tepid baths. I cannot take away their symptoms, but I offer my care as they battle the bug inside of them. 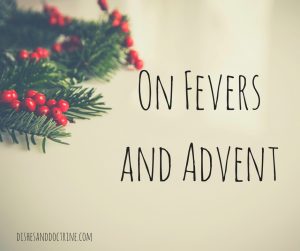 This stands in stark contrast to the deep spiritual illness we all contracted in the Garden. Each individual throughout history experiences the symptoms of a sin-sick soul. Our hearts hide hate, bitterness, and fear. We spread our infection through harsh words and self-serving choices. Human beings are unendingly capable to express evil in the most disgusting of ways.

We do not possess spiritual white blood cells that work to fight the disease of sin. We cannot defeat the depravity of our hearts. The diagnosis is grim.

Read these words from Scripture:

Surely he has borne our griefs
and carried our sorrows;
yet we esteemed him stricken,
smitten by God, and afflicted. Isaiah 53:4


It will be counted to us who believe in him who raised from the dead Jesus our Lord, who was delivered up for our trespasses and raised for our justification. Romans 4:24b-25a


He himself bore our sins in his body on the tree, that we might die to sin and live to righteousness. By his wounds you have been healed. I Peter 2:24


You have been healed.


My prayer this advent season (which kicks off today, by the way) is for a renewed awe at the incarnation of God himself.  May my eyes see clearly the severity of my sickness and may my heart rejoice at the cure provided by Jesus. May my soul once again realize that its very life depends on the One who gave His so freely. May this Christmas season be filled with joy flowing from more than dazzling lights, Frank Sinatra, and plaid and velvet toddler dresses. May it celebrate the ultimate healing found in Immanuel, God with us.