One of the sad parts of full time ministry is the regular bombardment of bad news. Although, I'm rarely the first to know, I often hear stories of failed marriages, battles with cancer, struggles with sin, or even wayward children.


Brokenness is all around us. One minute into the evening news shows us the affects of sin from every part of the globe.
Unfortunately, that bad news doesn't contain itself to other countries or even other churches. It's readily available in our own living rooms and church pews.


So, the question has to be asked. If brokenness is so rampant, what are we supposed to do with it? Do we ignore it and put on a plastic smile? Do we take pride in it, because it makes us like everyone else? Do we simply ignore it?


Let's take a look together at why brokenness matters in the life of the believer. 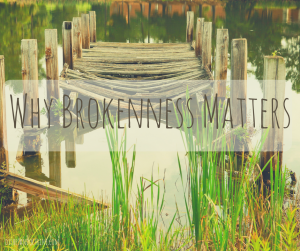 From medical diagnoses to adultery, the fractured pieces of our lives bring pain to both ourselves and those around us. It's inevitable.

If a husband is diagnosed with a rare, incurable disease, his wife and children are also greatly affected.

If a wife is unfaithful to her spouse, the infection of that sin spreads to her children, extended family, friendships, etc.

The phrase "no man is an island" is particularly applicable here. Brokenness cannot stay contained to one person. Psalm 37:39 says,

"But all sinners will be destroyed; there will be no future for the wicked"


The first failure in the Garden of  Eden had gigantic repercussions. Included in the deception of the snake was a forgetfulness of the long stretching effects of sin. Eve was only thinking about her own opportunity for greatness and Adam was only intrigued by what God might be withholding from them through His "don't eat" rule. Neither comprehended the pain that would be brought upon thousands of generations to come after a simple bite of fruit.


I can still smell the musty carpet in the church nursery turned 6th grade classroom. Mrs. Cook had just left the room with a warning to keep our mouths closed and our bodies in our chairs. Usually, the teacher's pet, I didn't initially plan on disobeying, but my best friend really needed to know the plans for our afternoon recess. I spoke a few words as quickly and quietly as possible before our teacher appeared in the doorway.


"Who talked while I was gone?" she asked as soon as she returned. About a dozen hands sheepishly lifted into the air which earned them the current classroom consequence. My hand was not one of them.


Immediately, my heart was filled with the heaviness of shame.


I had talked. I had disobeyed. I had sinned. And I deserved the full punishment for it!


The story has several other elements including a tearful admission and apology to Mrs. Cook three days later and the most beautiful illustration of forgiveness I had experienced in my short 11 years, but I will never forget the agony of guilt that followed me after my lie.


Unfortunately, it wasn't the last time I would experience shame after sin. It attacks us immediately after any failure big or small. It comes after eating one too many brownies to losing your cool with your four year old again. It can even rear its ugly head at unintentional brokenness. We experience guilt at our failure to solve world hunger and our lack of time to bring that new mom a meal.


Our shame causes us to hide just like Adam and Eve after their disobedience. Shame feels terrible so we sew together parts of our personality and lifestyle to cover the true state of our hearts. We act strong and unaffected by our brokenness, hoping that others won't notice. We laugh at our failures while all the time cringing inside at our lack of perfection. We shift the blame to others to minimize our own faults.


Shame leaves us feeling hopeless which is why the next point is so important.


The effects of sin in the world and in our own hearts, bring us to the end of ourselves. Our search to find strength and resilience inside consistently comes up short leading us to look to something bigger outside of ourselves.


It won't be found in "Inspirational Books" section of Barnes & Noble and it might not be the verse your friends quote to you when you share your shortcomings and needs at small group, but it is the answer and hope to the brokenness surrounding each one of us.


In the middle of verses depicting the desperation of human nature, we find a glorious hope in these few words. Adam and Eve had messed up and were hiding in their shame (as we can so easily relate). The Serpent seemed to have gotten his way and the beautiful life of the Garden was quickly wilting. God gives a glimpse of the future when a Rescuer, a Messiah, would come to bruise Satan's head conquering Him and ending his dominion.


The Gospel Transformation Bible sums up the hope offered in the middle of this fresh brokenness:


In other words, there is salvation in the shattered world we experience each day through sickness, sin, and corruption. The Second Adam restores the life that was lost to Satan and offers victory and peace. While we still battle the flesh and its evil effects, we will one day reign with Him as rulers over a once again perfect Earth.


Because of this hope, don't downplay your brokenness. Don't hide behind the facade of independence. Don't wallow in your shame.


Instead rest in Jesus' perfection. Hide in His work on your behalf. Rejoice in His victory.


Wait expectantly for the day when all brokenness will be replaced with unblemished wholeness forever.
Audio Blog Christian Living Gospel Theology