"Mommy? Mommy? Oh! she's sleeping!" came the little voice from outside my door before I heard little footsteps retreating down the hallway.

I had just laid down for a cat nap before preparing dinner and was grateful that he had decided to let me rest for a few minutes. 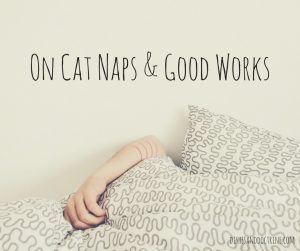 My momentary deep sleep was soon interrupted when he returned with a Spiderman blanket for my body and a clean washcloth to cover my feet. Seeing that I was cozy enough, he turned off the lamp on my bedside table and pitter-pattered out of my room once again.

He wasn't done, however. Now that I was snug under the blanket, he determined that I would need some fresh air from the ceiling fan which he could not reach after several attempts at using my bed as a trampoline.

It was time to recruit help. Soon his older brother joined in Operation Help Mommy Sleep which resulted in bright ceiling lights shining in my sleepy eyes and frustration from the commander who whispered loudly, "You're going to wake her up!"

The next step of his mission was to drag the oscillating fan from his bedroom into mine and attempt several different outlets before finding one that would work the best for his plan. I was incredibly grateful for the blankets he had so carefully placed over me when he turned the fan to its highest setting several inches away from my face. When goals his were finally accomplished he left the room with a whispered, "Good night, Mommy"

Needless to say, I got up from that rest time feeling far from refreshed. However, even though my eyes still felt heavy, my heart was full. In his four year old way, he had truly attempted to serve me. His gift was far from perfect, but I accepted it with joy (and quite a bit of laughter), because I know his heart toward me.

In quite the same way, the gifts and "sacrifices" I place at God's feet are never perfect either. They so often come from a heart with misplaced motives and selfish desires. Even the good I do is tainted with sin. However, because of Christ's perfect life and self-sacrifice, those imperfect acts of service are pleasing to Him.

As the Westminster Confession of Faith says:

"Notwithstanding, the persons of believers being accepted through Christ, their good works also are accepted in Him; not as though they were in this life wholly unblamable and unreproveable in God's sight; but that He, looking upon them in His Son, is pleased to accept and reward that which is sincere, although accompanied with many weaknesses and imperfections." (Westminster Confession 16.6).

The fruit of my faith in a perfect Savior, is a sweet offering to God.
Gospel Motherhood Theology