I'll admit that some of my favorite TV shows happen to be reality competitions. I easily get drawn into the drama of shows like Amazing Race, The Biggest Loser, The Apprentice, and Project Runway. In fact, if I watch even one episode, I'm hooked for the rest of the season. 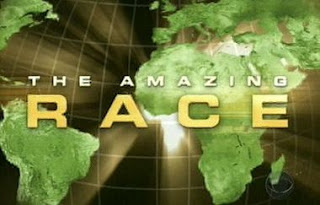 I've noticed a common theme in almost all of these kind of shows. At the beginning, most of the contestants are at least civil with one another, and some even become fairly close. Somewhere about three-fourths of the way through the competition, however, someone inevitably says,


"I'm not trying to be mean by (insert some sort of strategic or back-stabbing move), but this IS a competition after all!!"

In other words, it's time to cut out any kindness, thoughtfulness, or unselfishness and do ANYTHING to win the money, trip, or job!

As believers, we're striving to reach a prize, too!! Paul tells us in Philippians 3:14 that we ought to press toward the mark for the prize of the high calling of God in Christ Jesus.

It's interesting, though, that we're racing, but not competing with the others around us! In fact, winning isn't the end goal at all!! Instead, we are to be growing in spiritual maturity which actually promotes that same kindness, thoughtfulness, and unselfishness that the world so easily throws to the side.

(By the way, it is impossible to reach that spiritual maturity through a checklist of do's and don'ts. It is only by living in daily remembrance of the grace given to us at the cross that we can hope for any sort of true spiritual growth).

Competition (ie. jealousy and bitterness) can rear it's ugly head in so many "good" areas!
For example, I am not in competition with the blogger whose writing is being used to inspire and encourage others. I am, however called to encourage them to press on in their race!

I am not in competition with another church ministry that is flourishing and reaching many in the community. I am, however called to pray for the souls that they are impacting and for wisdom for the ministry's leaders.

I am not in competition with the mom whose children seem much more well-behaved or advanced than mine. I can, however, glean valuable insights from her, and look for ways to support a fellow young mom.

I guess you could say that the Christian life is a little like a relay. We're all running and racing, but we ought to be working as a team! Instead of comparing ourselves among ourselves (which scripture says is unwise - II Corinthians 10:12), we ought to save our energy and focus for the real (and very powerful) competition!