The high school lunch table -- This infamous symbol represents much more than mac 'n cheese and food fights. Somehow a simple table and chairs personifies an ongoing quest for popularity and approval. Have you ever noticed that almost every movie involving school age kids also includes a lunch room scene? (I have no scientific evidence to back up that claim).

The pursuit for approval from our peers is never ending. Look at the mommy wars.  We love to sit at the table with those who agree with us, and fling insults across the lunchroom to the moms who have different opinions. We crave the confirmation that we are in the "right crowd".

As we move on in our study of the themes of Galatians, I find it so interesting that even the apostles weren't immune to this craving for approval. Throughout the end of chapter 1 and through the beginning of chapter 2, Paul shares his beginnings as a gospel peddler. He was careful to protect the pillars of the good news and did so by having church leaders approve of his message. Their support was vital to his new ministry because they were seeking to preserve the purity of the gospel message. 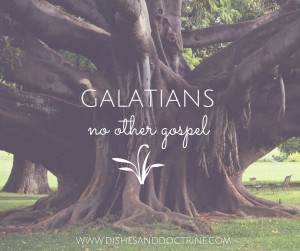 A few verses later, though, we see a different side to the approval coin. Paul points out a discrepancy in Peter's behavior. It seems as if Peter was regularly eating and fellowshipping with the Gentile Christians until James shows up with his Jewish friends. All of a sudden, Peter changes "tables" and sits only with the Jews hypocritically ignoring his new friends. This consequence was much confusion about the new relationship between the Jews and non-Jews.

I find it so interesting that it was James himself who takes an entire section of his epistle to address the sin of partiality. Treating others differently based on their outward appearance or family origin shows a misunderstanding of the gospel message itself.


James says, "Listen my beloved brothers, has not God chosen those who are poor in the world to be rich in faith and heirs of the kingdom, which he has promised to those who love him?"

Paul simply had to call out the duplicity in his fellow brother in Christ when he saw that his conduct was not in step with the truth of the gospel. (Again we see that he doesn't find his authority in his own opinions, but in the reconciliation Christ accomplished for believers).


Peter was acting differently with the hopes of gaining approval from James and his crew.


If I'm honest, I use the same tactic as Peter in my interactions with others. I use exterior characteristics to judge some and attempt to gain approval from others. The gospel frees us from this game of hypocrisy. As we read in Galatians 2:20, "It is no longer I who live, but Christ who lives in me..."

My embarrassing sins and constant shortcomings have been placed under the death and resurrection of Christ on my behalf. When God looks at me, he sees a righteous woman in perfect standing with Him. Because Christ lives in me, I can bestow that same gift of impartiality to others. I can live in light of God's approval by not living for man's.

In other words, the lunch table I sit at doesn't really matter. I don't have to be or do something to find value in someone else's eyes. My worthiness was established by Christ's obedience on the cross. Someday, those of us who rest in Jesus' work for us will experience the ultimate approval when we sit down at supper with the Lamb for all eternity.